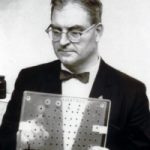 International PKU Day is happening on June 28th. Spreading the word about Phenylketonuria is very important to achieve our goals. As we have announced in our last news post we have launched a dedicated website for the International PKU Day. It’s available at www.pkuday.org. For this year there is a special event planned as it’s the 100th anniversary of Robert Guthrie birth. The #GuthrieMemorialDinner is a special occasion and an easy way to show your support for Phenylketonuria. Learn more about the idea:

To identify PKU babies affected by Phenylketonuria immediately after birth, Robert Guthrie invented the possibility for newborn screening, also known as the “Guthrie test”. Uncounted patients owe him the chance of early treatment and a normal life without the devastating symptoms of untreated PKU. On June 28th , 2016 is the 100st anniversary of Robert Guthrie’s birth. At this occasion, we want to invite people from all over the world to commemorate him and his lifetime achievements with a Robert Guthrie Memorial Dinner.

Please support us by sharing International PKU Day and the #GuthrieMemorialDinner
Follow this link to learn more about the Memorial Dinner: pkuday.org/memorial-dinner/