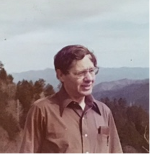 Professor Louis Isaac Woolf died aged 101 on 7 February 2021 in Vancouver, Canada, from a heart condition.  He is best known for developing his dietary treatment concept for phenylketonuria, PKU, based on a phenylalanine-depleted acid-treated milk protein.  In the late 1940s, when he was a biochemistry Research Fellow at Great Ormond Street Hospital, GOSH, in London, he had been pondering on possible treatments for the ‘untreatable, incurable’ PKU children seen there.  In what could now be considered translational research, a bridge between science and clinical practice, he had a ‘light bulb’ moment at a science meeting in which a more economical amino acid growth medium for a bacteriological test was proposed during a discussion.  Individual, pure amino acids were expensive at that time, whereas amino acids produced from protein hydrolysates prepared by treating casein from milk with acid were much less so.  Selective removal of phenylalanine and some other amino acids from the hydrolysate by treatment with charcoal was explained at the meeting.  Louis thought that by adding in other essential nutrients, this could be a suitable protein substitute food for PKU patients to lower the abnormally high phenylalanine concentration in their bodies and test the supposition that this was the main cause of their disabilities.

Louis was unsuccessful in persuading paediatricians at GOSH to trial this.  However, Dr Horst Bickel, who visited with Louis on various occasions, was receptive although allegedly sceptical at first.  He had a suitable young patient at Birmingham Children’s Hospital to trial this treatment with, and it was successful.  This was a world first and a lasting legacy of Louis’ broad thinking and collaborative nature.

Less well known is Louis’ conviction that newborn screening would likely improve outcomes by allowing earlier treatment of PKU.  Urine testing appeared a simple and non-invasive way to do this.  He had moved to Oxford to continue PKU research, and at a chance meeting back in London, he discussed the idea with Senior Medical Officer in Public Health, Dr Nancy Gibbs, from Wales.  This conversation led to the first community-based screening programme for the general newborn population.  It aimed to detect all PKU cases in a cohort of babies in Cardiff from 1958 to 1959.  … another world first soon to be followed by similar urine screening programmes in England, Scotland and Northern Ireland.  From the evaluation of these screening schemes, it became apparent that urine testing was not sufficiently reliable.  Louis became a member of 2 working groups reporting to the UK’s Medical Research Council on detection and treatment of PKU in 1963 and 1968.  The expert groups’ conclusion and recommendation was that blood analysis with the heel prick test we are now so familiar with was more satisfactory.

Louis’ published work had become noticed internationally, and in 1968 he was offered a post as Associate Professor in the Kinsmen Laboratory of Neurological Research at the University of British Columbia, which he took up.  He was promoted to Professor 6 years later in 1974, and he retired in 1984 after a 16-year teaching and research career there.

A shy and modest man Louis was devoted to his family.  His wife Frances died in 1991, and Louis is survived by his only daughter Lesley, grandsons Benjamin and Oliver and his youngest brother, Henry.  He was beautifully spoken in an old-fashioned British way with an astonishing memory to the end.  Generous to people who criticised him, he quietly stood his ground, recognising that valid debate is integral to scientific discovery.  Like many another innovative scientist – it is in this way that he triumphed over sceptical adversity to leave a legacy in pioneering the successful treatment of PKU.

Louis asked that there should be no funeral and in lieu of flowers that people might make a donation to CARE, Canada.

This website uses cookies to improve your experience while you navigate through the website. Out of these, the cookies that are categorized as necessary are stored on your browser as they are essential for the working of basic functionalities of the website. We also use third-party cookies that help us analyze and understand how you use this website. These cookies will be stored in your browser only with your consent. You also have the option to opt-out of these cookies. But opting out of some of these cookies may affect your browsing experience.
Necessary Always Enabled

Any cookies that may not be particularly necessary for the website to function and is used specifically to collect user personal data via analytics, ads, other embedded contents are termed as non-necessary cookies. It is mandatory to procure user consent prior to running these cookies on your website.